20% of Belgians are looking forward to the arrival of Disney+

Netflix, Amazon Prime Video and other video streaming services have the wind in their sails. 40% of Belgians already have a paid subscription to at least one streaming video service (average: 1.3 subscriptions by respondent). Among those 18-24 years old, this figure is greater than 60%.

Of all the tech trends in 2020, six stood out at CES, which just ended. The first was the streaming war, which goes well beyond television.

The streaming war really started in 2019. Apple TV+ was launched in more than 100 countries, including Belgium. The much-discussed Disney+ service was also launched in the United States. That isn’t all, however, because the types and forms of content offered have grown alongside the number of players. In fact, several announcements were made at CES. There’s Quibi, which will launch in April 2020 in the United States and is seeking to establish itself in the smartphone video world, with short duration content. NBCUniversal gave a preview of its upcoming streaming service, Peacock, which will launch in July this year. Premium subscribers will have access to original content. In addition to series and films, Peacock will offer sports, including the Olympics, and news with NBC News Now.

And there’s much more, since streaming services will be offered on less traditional channels. Amazon’s* Fire TV is being integrated into the backseat screens of BMW and Fiat-Chrysler vehicles. On the other side of the world, the Chinese electric car brand Byton has also announced that it is concluding a partnership with Garmin to provide content and services.

So, how interested are Belgians in streaming video services?

To get a clearer picture, IPG Mediabrands surveyed 1,000 Belgians 18 to 64 years old.

The first observation made was that 90% of the people surveyed know about streaming in general, whether for video, audio or gaming. Nonetheless, among them, 60% do not use it yet.

Unsurprisingly, the American giant Netflix surpasses all other players, with 81% name recognition for the panel surveyed as a whole. This figure is 87% for those between the ages of 18 and 44. “That said, Disney+ already has excellent name recognition (28%), already comparable to that of Apple TV+ or Be tv”, stated Noelle Stevens, Trade Marketing Director at IPG Mediabrands.

On the Dutch-speaking side, Stievie Premium took 6th place with 28%, just behind Apple TV+, which had 30%. On the French-speaking side, VOO Sport World led Eleven Sport, at 21% and 16%, respectively.

40% of our respondents stated they had a paid subscription to at least one video streaming service (average: 1.3 subscriptions per respondent) and this figure reached 64% among 18 to 24-year-olds. At the top of the ranking are Netflix and Amazon Prime Video.

Even before arriving in the country, Disney+ seems to have won people over, since 1 out of 5 Belgians 18 to 65 plans to subscribe to the SVOD platform. This is more than 1.2 million people, not households.

Netflix will also continue to grow, with more than 600,000 people planning to explore its catalogue of films and series. 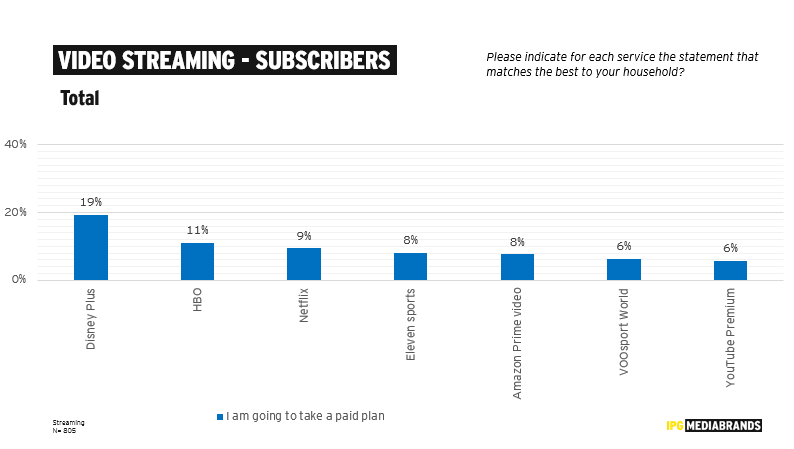 We no longer view audio-visual content on televisions only, but also on our phones, tablets and/or computers. This explosion of screens affects Belgians in general. There are now over 4 screens per household (source: Global Web Index – 2019 Q3).

Subscribers to at least one streaming service have a tendency to watch films and series as a couple, or alone, when they live in a couple. 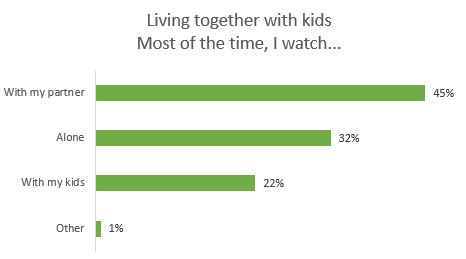 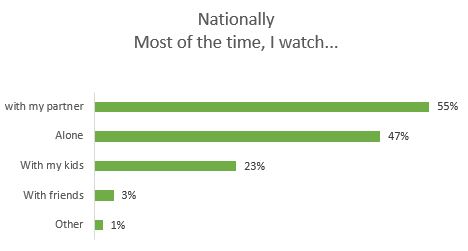 “Our survey has also shown that more than half of those surveyed use their video subscription at least 3 times per week and a third, almost every day”, added Noelle Stevens, Trade Marketing Director at IPG Mediabrands.

Of course, TV continues to have high audience scores, as exemplified by the series Eigen Kweek, broadcast on EEN, which attracted 313,600 viewers on February 5th 2019 (25 to 54-year-olds with children). On the French-speaking side and with the same target, the film “Raid dingue”, broadcast on RTL-TVI, enabled nearly 210,000 viewers to spend a real moment of entertainment together as a family.

Should we expect a slew of articles decrying the nefarious effects of Netflix and others? Clearly, the answer is yes. Netflix has a detrimental effect on our lives as couples, in particular among those 18 to 38 years old, to the point of negatively influencing the birth rate in the United States, according to a study published in April 2019 by the Wall Street Journal. More seriously, it is undeniable that the major players in video streaming have changed our behaviours through catalogues which constantly offer more content and push aside our hobbies, creating new events for which we plan or which are cannily suggested to us, making the television of the past more and more obsolete.

Lastly, the war between streaming players is also open. Last November, Netflix announced its offering of narrative podcasts, or series in audio form.

On February 12th, DPG Media and Telenet announced their intention to jointly launch a fully-fledged streaming service with local and international content by setting up a joint venture between the two companies. They expect the new company to be up and running in the fall of 2020.