Awareness and excitement for Spider-Man: Homecoming was very high, but fans had set the bar even higher and we risked letting them down. 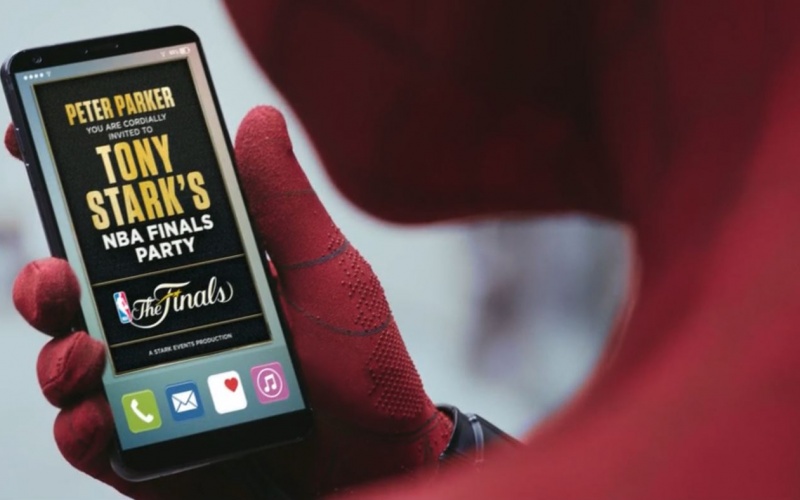 Their first challenge was to live up to the Spider-Man hype by giving fans a fresh and unexpected glimpse into Spider-Man’s life.

At the time of the domestic campaign, nothing would drive more hype than the National Basketball Association (NBA) Finals. Data told them this sporting event over-indexes on core Marvel fans and mainstream audiences. However, the NBA Finals are also a hot commodity for all movie studios. There were a total of nine movies that ran trailers in the NBA Finals.

Their second challenge was to stand out amongst the many trailers being shown during the Finals.

Their four-part Spider-Man trailer follows Spider-Man as he desperately tries to attend Tony Stark’s watch party in time. Throughout the Finals, they premiered new content, continuing the story first on TV, and then online over the course of the 5 game series.

To give their content a real-time feel, live highlights were inserted into TV screens within the in-game spots, a first-to-market. Spider-Man acknowledged these highlights while on his mission, putting him right in the NBA action with audiences.
They continued blending worlds by having Spider-Man encounter famous celebrities on his quest to attend the party like DJ Khaled, Marvel icon Stan Lee, and NBA legends Magic Johnson and Tim Duncan.

To further the real-time element of the creative, featured celebrities posted exclusive content to their social handles, timed to each spot’s debut on TV to create a sense that they had just encountered Spider-Man moments before in real life.

Spider-Man: Homecoming successfully broke through in the NBA Finals, having the highest search volume out of all of the movies with its debut in Game 1.

Across the three weeks that the Spider-Man/NBA creative played out, they garnered over 285,000 social mentions — resulting in over 1.6 billion social impressions. Overall, social mentions saw 93% positive sentiment.

The content was collectively viewed more than 40MM times online, in addition to the 17MM+ viewers per game who watched live on ABC.

When compared to the three weeks prior to this execution, interest in seeing the film went up by 17%. Their research showed that 26% of the $117MM opening box office was attributed to social mentions — social mentions that the Spider-Man/NBA Finals campaign contributed to.

Most importantly, fans came out in full force with Spider-Man: Homecoming coming in #1 at the box office on opening weekend.